How could a Ther-Mix optimise your method?

The Vitl Ther-Mix is a programmable heated laboratory mixer. Unlike any other heated mixer available, the Ther-Mix allows you to create and store personalised multiple-step programs.

Used with Vitl’s unique Heated Modules, the Ther-Mix is accurate to within 0.1C at all temperatures and incorporates condensation-reducing heated lid technology. 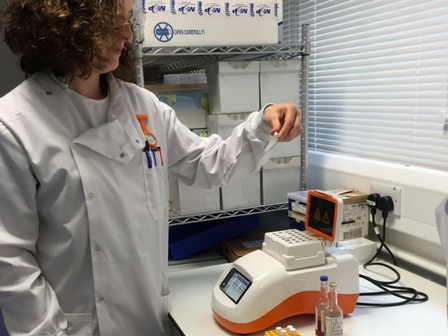 We took a look at some commonly available protocols to see how they could be improved by using the Ther-Mix:

This method contains multiple vortex mixing and heating steps and consequently requires the use of both an incubator and a mixer.

Using the Ther-Mix, this multi-step protocol could be easily programmed to automatically run through each of these steps including any pauses required for adding the Lysis/Binding buffer at step two.

As well as being more efficient, less change of thermal environment is likely to be beneficial if you’re working with enzymes.

Steps five and six of this method require you to incubate and mix for one-two hours and start preparing the Detection Antibody 10-15 minutes before the end of the incubation.

Using a traditional mixer would mean regularly checking the clock or a stopwatch to know when it’s time to start the preparation step. The Ther-Mix displays how long you have left in the particular cycle so there’s no need to remember to start the stopwatch or check the clock as it’s always there for you to refer to.

There are additional incubation and mixing steps later on, each of which could be created as a separate program on the Ther-Mix as discussed above.This means that you could run each step at the touch of a button without any set up.

You can also personalise then by naming them something obvious to avoid accidents such as at ELISA step five, ELISA step 10 etc. as well as locking the programs to prevent any accidental changes to any of the steps by a user.

During the ‘binding DNA’ part of the method it is necessary to mix at low speed for various intervals, for example, step five requires intermittent swirling of the plate during incubation.

Instead of taking the plate in and out of the incubator repeatedly (but not repeatedly), a Ther-Mix program could be created to do all of this.

Plus, by automating this process, the inherent variability of an operator having to use a timer to decide when to intervene can be removed.

The protease digestion and DNA eluting methods also includes different mixing speeds during incubation which again could be created as Ther-Mix programs to avoid the need for a water bath, a well-known source of contamination in the laboratory.

The test procedure for this method contains shaking and incubating steps with very specific timings. The Ther-Mix gives an audible alert when a program is completed, making it easier to ensure that you strictly adhere to methods such as this. 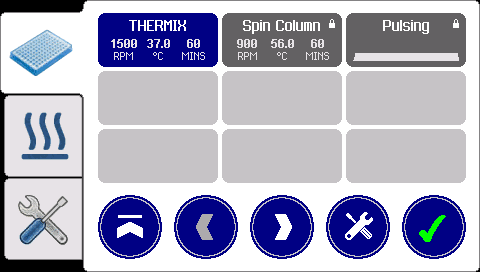 If you need to leave your samples overnight, as in step 6 of this protocol, can you be sure that your method of incubation and mixing is dependable?

We tested the Ther-Mix for over 5 years of continuous use and found no degradation in performance over that time.

Of course, no method requires this amount of use but if you need something you can rely on time and time again, the Ther-Mix is the way to go.

This method from Bio-Rad specifically states that samples should not be incubated for longer than 1hr and so the Ther-Mix countdown timer and audible alert could be a life-saver here!

There is a mixing step too so you’ll be making full use of the functionality.

“If using a heating block or water bath, vortex the tube for 10 s every 10 min to improve lysis.”

Clearly the heated mixer is a preferential option in terms of efficiency, but how can you be sure that the sample and buffer are adequately mixed?

The Ther-Mix uses the same controlled mixing technology as the Co-Mix and is capable of thoroughly mixing highly viscous solutions as documented in this application note.

Water baths are also well-known sources of contamination in the lab so you can avoid that risk too.

The methods quoted here are just a few examples of the many that could be made more efficient, accurate and reliable by using a Vitl Ther-Mix.

The Ther-Mix brings a whole new level of repeatability to heating and mixing protocols.

Find out more about the Ther-Mix programmable heated mixer.